Our Wood-fired Pizzas and prices

Posted on May 16, 2018 by huskwoodfiredbakery

Every Friday evening at Husk we will be serving up a selection of our lovely 12″, thin and crispy Wood-fired Pizzas.

We’re open from 5.30pm to 8.30pm. Please ring with your order and then you are welcome to wait while they are prepared and cooked in our wood-fired oven, which is definitely an art rather than a science, or pop up to The Earle Arms for a swift glass of something. It is Friday after all.

Posted on May 25, 2016 by huskwoodfiredbakery

A few pics to show you what Husk looks like if you’ve never visited.

Tools of the trade.

The all important order book.

Where some of our bread ends up.

How could you resist…

Woodfired Pizzas are back on the Friday night menu

Posted on January 15, 2016 by huskwoodfiredbakery

Every Friday I will be stoking up the fire at Husk and with the help of my wife, Linda, Ruby and Theo. We will be serving the county and beyond with our gorgeous Woodfired Pizzas.

We are open from 5.30pm to 8.30pm. Best to ring with your order and then you are welcome to wait while they cook, which is definitely and art rather than a science. Alternatively pop up to The Earle Arms and enjoy a crafty pint before returning home the hero with your order. (Warning: The Earle Arms does tend to close in January).

View from the bakery

Our Woodfired Pizzas are 12″, thin and crispy and you can have either a tomato or garlicy oil sauce, then choose your toppings from the following. We have plenty of extras for you to customise your order, just ask.

We welcome any comments and indeed any ideas for alternative toppings. just let one of the Husk team know and we will see what we can do!

Posted on January 15, 2016 by huskwoodfiredbakery

Amid other sad news on Monday came the announcement that sliced white is toast. Well, it is at M&S anyway, with the retailer announcing plans to scrap “simple white bread” in favour of a fibre-enriched alternative – what product developer Jenny Galletly calls “bread with benefits”.

I’m tempted to object to this idea on principle, given that the main benefit of all bread, whatever the fibre content, is that it’s completely, addictively delicious, but though sliced white has a certain nostalgic pull for me, I can’t regret its passing.

One whiff of that yeasty, faintly vinegary smell and I’m back in school uniform again, rushing to cram as many slices of toast in as possible during morning break in the hope of inducing a pleasurable carb coma just in time for double maths. These days, however, with algebraic equations a distant trauma, I find its cotton-wool texture faintly sinister, and the way it gums to the top of the mouth downright unpleasant. I’m not alone; sales of sliced white are in what one research company describes as “terminal decline” as consumers reach for fancier, “speciality” alternatives, so M&S might well be on to something.

Yet the bog-standard loaf has some surprising adult fans; Nigel Slater, for one, who insists that a bacon sandwich “must be on white sliced bread of the very worst sort”, while Nigella uses it for her delectable mozzarella in carrozza toastie, writing that “one of the advantages of plastic bread is that it is easily wodged together”.

Masterchef judge Gregg Wallace is a fierce defender of the stuff – according to his autobiography (rarely off my bedside table), a fish-finger sandwich made with Mother’s Pride is his idea of “absolute perfection”. Fair enough. He has also, however, claimed to the Daily Mail, “there is no nutritional difference between a £10 artisan baked loaf and an 80p sliced white. The only difference is snobbery.”

Which is where I draw the line; anyone’s free to enjoy whatever bread they wish, but please, don’t claim that the cheapest sort, pumped full of yeast, palm oil, enzymes and preservatives to speed the baking process and retard the ageing one, are on a par with traditionally made versions. It’s just not true (plus, I’ve never come across a £10 loaf Gregg, and I live in Islington).

If we ate only for nutrition, we should probably stick to the kind of dark, brooding sourdough studded with so many seeds it should be sold with a box of toothpicks, but we don’t. White bread has a taste, and a texture all of its own, and some things, crisp butties and bacon sarnies among them, just wouldn’t be the same without it.

In an ideal world, it would just be made with flour, yeast, water and salt, but adding a bit of extra fibre is a good start. Let’s hope that, as in the case of the ready meal, and the gourmet sandwich, where M&S lead, others follow.

Posted on December 14, 2015 by huskwoodfiredbakery

First of all thank you all my lovely customers for your continued support through 2015.

The Bakery will be closed on Thursday 24th December and we will be stoking up the fire and re-open on Wednesday 6th January. Please let me know of any orders you may have in plenty of time.

The last Woodfired Pizza Night will be Friday 18th December and we will be up and running again on Friday 8th January.

Best wishes to one and all. Have a great Christmas and New Year.

All the best, Paul and Linda.

Posted on August 14, 2015 by huskwoodfiredbakery 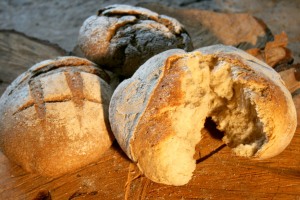 Dear all, thank you for all your continued support.

Just to let you all know I am going to take a short break to re-charge my batteries.

Husk Bakery will be closed from Monday 17th August and open again Friday 28th evening just for Pizzas and Saturday 29th for bread.

The Great British Bake Off

Posted on December 18, 2014 by huskwoodfiredbakery

Everything you need to know about the new series.